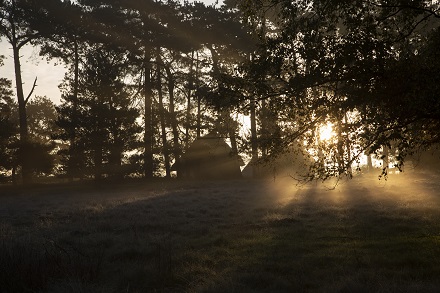 West Stow is one of England's great archaeological sites. It is the site of an early Anglo-Saxon village, occupied from AD 420-650, over 400 years before the Norman Conquest.

The Country Park was originally part of the Culford Estate, but the site was purchased by the local council in 1886. In the first half of the 20th century the eastern half of the site was used as a sewage farm dealing with sewage from Bury St Edmunds. After it closed sand and gravel was excavated and the resulting quarry was used as a municipal rubbish-tip. In 1979 mineral extraction began at the western end of the site which eventually resulted in the creation of a large gravel pit.

Following the discovery of evidence in the late 19th century of an Anglo-Saxon settlement, a major archaeological excavation took place in the 1960s. Remains of an Anglo Saxon village were excavated and a reconstruction of the buildings in the settlement was started.

West Stow Country Park was opened to the public in June 1979. The timber clad Visitor Centre was opened in 1988 and eleven years later the Anglo-Saxon Museum and café were opened.

Back to West Stow Country Park