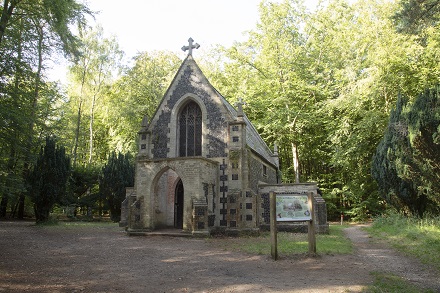 In the 19th Century, Brandon was vitally important to the British Army because the bulk of the country’s gunflints were manufactured here. In fact, Brandon Flint was said to be the gold standard of all flint, guaranteed to spark on each shot!

Local businessman Edward Bliss made his fortune supplying the army with flint during the Napoleonic Wars, and in the early 1820s bought over 2,500 acres of The Brecks and created his estate. Today, Brandon Country Park occupies a small portion of the original land purchased by Bliss.

Brandon Park House is a Grade II listed Regency mansion, built by Edward Bliss and occupied by his family from 1826 until 1903. Almeric Paget bought the house in 1903, and the house is now privately owned.

The gothic Mausoleum surrounded by Irish Yews was built by Edward Bliss as the final resting place for himself and his wife. The flintwork to the main chapel shows the quality knapping for which Brandon was famous.

Today the Mausoleum is home to Pipistrelle bats – and reputably the ghost of Edward's nephew, Baron Boretto! Dressed in knee breeches and a deer stalker and holding a candle-lit human skull, he is occasionally seen wandering the grounds. What, or who, is he looking for?

Back to Brandon Country Park