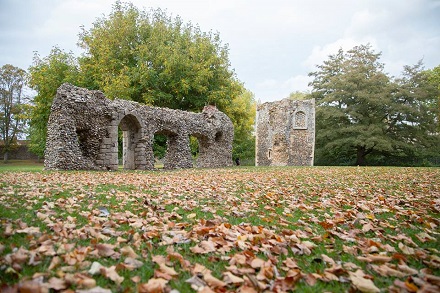 The award-winning 14-acre park is on the site of a former Benedictine Abbey, once a power house of medieval England.

The Abbey Gardens was created in 1831 by Nathaniel Hodson. Originally a botanic garden laid out in the same style as the Royal Botanic Gardens in Brussels, in 1936 the concentric circles were replaced by the sixty-four island beds which, together with illuminations, formed part of the Coronation celebrations for George VI in 1937.

The Abbey Gardens Sundial Fountain was gifted to the people of Bury St Edmunds in 1871 by the 3rd Marquess of Bristol. This Victorian drinking fountain, with sundial cube on the top is an extremely early example - quite possibly the earliest in the country - of a sundial that allowed the town clocks to be set to GMT rather than the local mean time.

Here in Bury St Edmunds, on the right as you pass through the Abbey Gate, is the world’s first internet bench! Installed in 2001 by Microsoft, the computer giant chose the town for the pilot scheme from hundreds of applications made by local authorities around the UK.

Back to Abbey Gardens