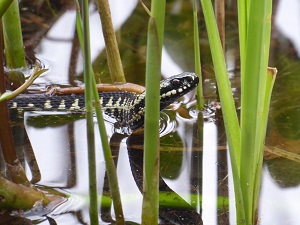 Look out for buzzards soaring in the air above, sparrowhawks skimming through the trees, nuthatches, nightjars, woodlarks and blue tits. The  lake is often full of mallards, and home to toads and dragonflies, plus look out for our resident heron!
Listen out for woodpeckers drumming or barking muntjac deer, and at dusk hear our resident tawny owls.

Spot a kaleidoscope of butterflies, wildflowers (the purple heather on the heathland looks particularly spectacular when in full bloom in August), and plenty of fungi –from earthstars to deathcaps and stinkhorn fungi to coral fungi!

The Breckland heaths are a unique environment and habitat, attracting rare wildlife and plants and designated Sites of Special Scientific Interest (SSSI).

Edward Bliss planted an extraordinary 8 million trees on his estate, creating much of what we know today as Thetford Forest! Most of these were plantations and shelterbelts of larches and scots pine, but he also created an arboretum of exotic species from Blue Atlas Cedars to Giant Redwoods and Monkey Puzzle trees.

Built in the late 19th century as a kitchen garden growing food for Brandon House, the Walled Garden contains features including a well, herb garden and pumpkin patch. A perfect picnic spot! The Walled Garden is also available to hire, offering a tranquil, private outdoor space for a party, workshop or event!

Edward Bliss built an ornamental lake with a small rustic bridge between 1820 and 1845. In 1992, the lake was redeveloped to look more natural.

The lawns today are much as they were when they were created – formal gardens leading down from Brandon Park House to the lake in a series of terraces.

Back to Brandon Country Park